Question 1 (Transportation) - We purchased six new yellow buses and a car. The six buses, 2018 Bluebirds, were here for the first day of school. Five of the buses are being used on routes with the other used for activities. The 2018 Chevrolet Impala arrived in November and will be used for trips that involve 1-4 people.

Question 2 (Buildings) - By far the biggest question regarding finance. With this question, we are finalizing plans for a new roof on the middle school, a new gymnasium with safe room, and a new early childhood center with safe room. We will hopefully see construction begin on the middle school roof in December. The day after the bond issue was passed, our school district wrote a grant to FEMA to help subsidize the cost of the safe-rooms in both building projects. This grant was written in the amount of $1.5 million dollars. Although FEMA could not give us an exact date to when they would award the grant, we were expecting to be awarded by the end of the year. Unfortunately, mother nature dealt us Hurricanes Harvey and Irma. FEMA has put the grant money on hold for the time being. We will make a decision here in the next month or so whether to wait on the answer from FEMA on the grant, or to commence building without it. FEMA states that if one piece of dirt is turned over before an approval letter is sent, then the school forfeits their rights to the grant.

Question 3 (Activity Bus) - With this question, we were able to purchase a 2006 Van Hool passenger coach. This bus was totally refurbished and looks brand new. It also came with a new Allison transmission. We were able to pick it up in Dallas on September 7 and is now being used by our activities here at school. 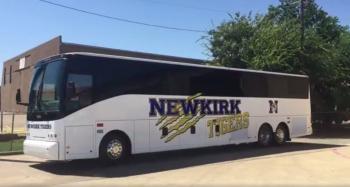